ホーム > 業界情報 > Official announcement! AMD confirmed the acquisition of Xilinx for USD 35 billion, which will be completed by the end of 2021!

Official announcement! AMD confirmed the acquisition of Xilinx for USD 35 billion, which will be completed by the end of 2021!

On October 27th, AMD officially announced that the company and FPGA chip leader Xilinx had reached a final agreement, agreeing to AMD to acquire Xilinx by issuing shares worth 35 billion US dollars.

The transaction is expected to be completed by the end of 2021. The combined company will have 13,000 engineers and invest more than $2.7 billion in research and development each year. 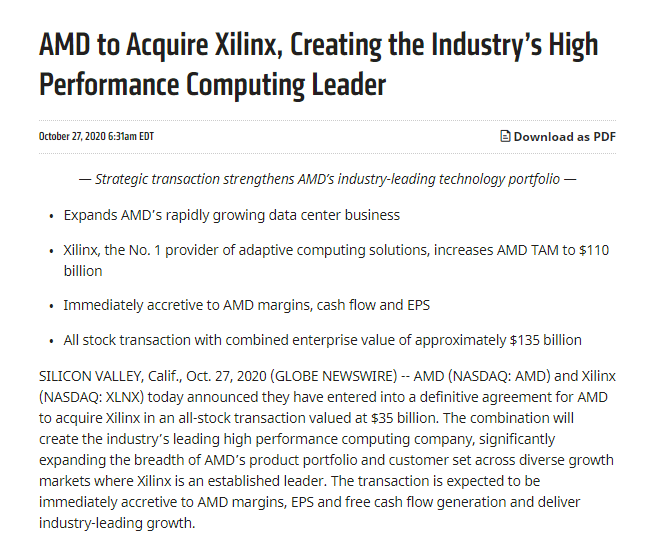 According to the agreement, each Xilinx common stock can replace 1.7234 AMD shares. Xilinx’s valuation is about $143 per share, which is 25% higher than Monday’s closing price and 35% higher than the price before news of a possible deal in early October.

Upon completion of this acquisition, AMD will formally form a product line of "CPU+GPU+FPGA", further enhancing its competitiveness with Intel in the data center chip market. This is also an important step for AMD to move towards next-generation heterogeneous computing. It means that AMD will have the opportunity to further penetrate into AI chips, the Internet of Things, aviation, automobiles, 5G communications, artificial intelligence and other fields, opening the third advantage track.