In order to reduce dependence on China, Biden signed an executive order to cooperate with Taiwan, Japan and South Korea and other countries/regions to accelerate the establishment of cooperation in chips and other strategic industrial chains. It is not difficult to see that the US government has gradually paid attention to the chip supply problems it faces. 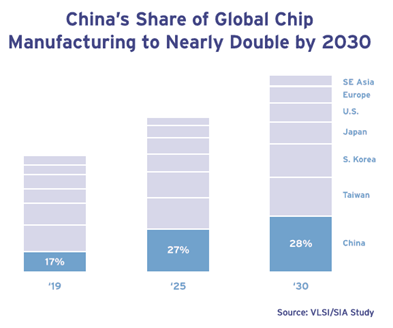 Recently, TSMC Chairman Liu Deyin announced the progress of 3nm process research and development. Liu Deyin said that not only did the research and development of the new process go smoothly, it was even faster than expected, and its 3nm process could be commercially available in 2022. However, it is worth mentioning that TSMC’s 3nm technology still uses the FinFET structure, and Samsung’s 3nm technology will be the first to upgrade GAA technology.

In addition, TSMC’s exposed internal letter confirmed that it will invest about 232.6 billion yuan to open six new factories in the United States, located in Arizona, the United States, in order to achieve the goal of building a super-large fab. According to previous news, the factory is a 5nm 12-inch wafer fab, which will begin construction in 2021 and is expected to be put into production in 2024.

In fact, TSMC’s plan to "build a factory in the United States" has been made public as early as May 2020. At that time, TSMC issued a statement stating that the chip factory will be built in Arizona. It plans to start construction in 2021 and put into production in 2024. The 5nm process will be used for related customer foundry chips. The planned monthly production capacity is 20,000 wafers.

It is worth mentioning that TSMC has set up a fab in Camas, Washington, and has design centers in Austin, Texas and San Jose, California.

At that time, TSMC had estimated that the estimated expenditure (including capital expenditure) for the construction of the Arizona factory was 12 billion US dollars. However, the investment in the construction of a 12-inch wafer fab still requires NT$120 billion. If the news of TSMC building six new fabs in the United States is true, the total investment will reach NT$1 trillion (approximately US$35.9 billion). ). At the same time, once the factory is completed, the monthly production capacity of the new US factory can reach more than 100,000 pieces; based on this, TSMC surpassed Samsung and was once the largest non-US semiconductor foundry in the US with the largest production capacity.

In addition to the factory building news update, TSMC is currently recruiting technicians to the US station. According to TSMC previously revealed that the new US plant will directly create more than 1,600 high-tech professional positions and thousands of indirect positions in the semiconductor ecosystem.